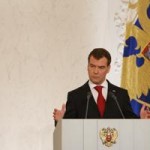 The main points of what the Russian president said in his state of the nation address: Compliments of RIA:

1. Agreement on missile defense system will either be reached within the next decade or Russia will need to deploy new strike forces

2. Measures against major oil spills should be discussed globally

3. Bribe takers should be fined 100 times the amount of the bribe and intermediaries in bribe taking should also be penalized under Russia’s Criminal Code

4. Russia will discuss the scrapping of visas and Russia’s accession to the WTO at the Russia-EU summit in Brussels next week

5. At least 50 percent of saved budget funds as well as additional income to the federal budget should be spent on modernization

7. Russian authorities at all levels must get rid of property unrelated to their work

8. The government should prepare proposals on penalizing officials for not performing their duties in a timely manner

9. Russia should reduce annual inflation to 4-5 percent in the next three years

10. Use of maternity capital to pay mortgages must become the norm starting in 2011

11. There should be no orphans in Russia because the main goal for orphanages is to help families to adopt children

12. People convicted of child abuse will be banned from employment in the education sector

13. Care of children should be a key state task

14. All Russian regions should have child ombudsmen

15. A law on the criminal responsibility for the sales of alcohol to minors will be adopted in the near future

16. Russian families should be given a plot of land to build a house on, as well as tax breaks, after the birth of a third child

18. Russia will spend 30 billion rubles (about $1 billion) on the joint research work of the country’s leading universities and major companies

19. Russia will increase the share of national products on the pharmaceutical market from 20 to 50 percent in the near future

20. Russia will spend 100 billion rubles on the development of children medicine in two years

22. Heads of Russian regions should make annual reports on the environmental situation

23. Environmental issues should be discussed with relevant non-governmental organizations before the construction of infrastructure and other facilities

24. The Russian government and regional authorities should focus on the development of a military and patriotic movement in the country

After listening and looking at the whole speech. What RIA did just made sense. I have posted his whole speeches in the past but no one reads them…