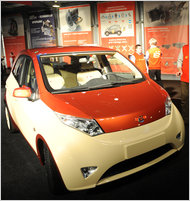 The designers of the Yo claim that at about 67 miles a gallon, or 3.5 liters per 100 kilometers, it will achieve better fuel economy than the Toyota Prius.

It is called the Yo, for the Russian letter “ë,” and it can use either gasoline or natural gas to generate its electric power.

Proponents say the Yo makes use of Russian engineering innovations but can be priced for mass consumption because of its bare-bones approach to hybrid automotive technology.

While two electric motors propel the Yo, a small petroleum engine that can burn either gasoline or natural gas will run nearly continuously to generate the electricity they consume. Instead of charging a battery, as in the hybrid Toyota Prius, the generator in the Yo either powers the motors directly or fills a bank of capacitors that can hold only a small charge.

The designers say that at about 67 miles per gallon, the Yo will achieve better fuel economy than the Toyota Prius (about 51 miles per gallon), in part because it is lighter. Like other gas-electric hybrids, it will also have a total range far beyond that of a pure plug-in electric car like the newly introduced Nissan Leaf.

Mr. Prokhorov, who made his fortune in Siberian mining, promised that the car would defy Russia’s stereotype for dismal quality in the auto industry — a poor image he said was at odds with Russian achievements in other engineering realms.

“Don’t forget that in Russia we were the first to put man in space,” Mr. Prokhorov said at a media event to unveil three Yo prototypes: a coupe, a hatchback and a delivery truck. “Unfortunately, in the last 50 years, we are playing from behind a little bit.”

Mr. Prokhorov is the sole backer of the hybrid car effort. He intends to made an initial investment of about 150 million euros, or about $200 million, in a new Russian company called e-Auto, which will also manufacture the Yo. A team of about 40 engineers developed the car.

The Russian designers said the electrical generator approach of the Yo was sometimes used in city buses but not in cars. The advantage, they say, is in the small petroleum engine’s operating at its most efficient rate at all times, while the electrical capacitors absorb or discharge energy to accommodate start-and-stop city driving.

The designers say that the Yo’s fuel economy will be better than that of the Prius partly because the vehicle is lighter than the Prius and it has a lower top speed and only modest horsepower.

The fuel economy, the designers say, also owes to its unusual engine, a Soviet-legacy design where the pistons move in a circular motion. This approach to internal combustion, called a rotary vane engine, had some use in Germany in the 1930s but was largely abandoned later except in the Soviet Union, according to Andrei G. Ginzberg, chief engineer for the Yo.

Scientists honed it at a secretive laboratory in the Siberian city of Novosibirsk, he said, but never commercialized the design.

The Yo is intended for domestic sale in Russia, where it will compete in an automotive market bouncing back after the recession. Because financing is costly, most families buy cars with at least half the money down, confining the middle-class car market to vehicles priced close to $10,000. Few foreign hybrids are sold here now.

And while the car is snug, Mr. Prokhorov gleefully demonstrated that even his 6-foot-8 frame could be folded into both the front and the rear seats — a demonstration that also highlighted Mr. Prokhrov’s litheness as a lifelong basketball player.

Mr. Prokhorov is considered one of Russia’s richest men, with a fortune made through his ownership of the Norilsk Nickel mine in Siberia, which produces about 20 percent of the world’s nickel, along with precious metals like platinum and palladium.

Because he sold shares in Norilsk just before their value collapsed in the financial crisis, earning at least $4.5 billion along with a stake in another mining company, Mr. Prokhorov entered the global recession awash in cash.

In May, he completed a deal that made him the principal owner of the New Jersey Nets and the first foreign proprietor of a National Basketball Association team. He is also 45 percent owner of Barclays Center, the team’s new arena, which is being built near downtown Brooklyn.

Back in Russia, the country’s leaders have been pressuring Mr. Prokhorov and other wealthy businessmen to help Russia diversify its economy away from oil, by investing in high technology, a priority of President Dmitri A. Medvedev that Mr. Prokhorov has said he shares.

He noted, though, that he would steer clear of existing Russian carmakers like Lada.

“To invest from scratch is very important,” Mr. Prokhorov said. “It’s a totally new concept. All the old-fashioned car producers, they are linked with old technology.”

Mikhail V. Ganelin, an industrial analyst at Troika investment bank in Moscow, hailed the project as a worthy bet on Russian engineering in a prospective field. But he said he did not expect the Yo to make much headway in turning around the glum fortunes of Russia’s automotive industry.

In Russia, Mr. Prokhorov is known as the bachelor billionaire for his penchant for parties stocked with models from Moscow agencies, an image he has embraced with self-deprecating humor.

On Monday, he said he wanted to break two stereotypes. Russia, he said, could make a modern car. And new cars, he said, need not always be presented with smiling models nearby. And indeed none were to be seen.