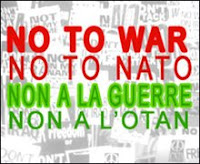 It looks like NATO has a unwelcome birthday gift coming in the beginning of April. As NATO approaches its 60th anniversary celebrations. Anti-NATO activists are gearing up for mass protests surrounding the alliance, they have gathered in Strasbourg where NATO will hold its summit in April.

Opponents of NATO from 80 countries are preparing a counter summit and are holding a unique conference this weekend at Strasbourg University to plan strategy. The coalition of 500 associations, known as the Strasbourg Collective, claims the right to demonstrate in the center of the city. The French government is saying no to them. Nothing is to be allowed to interrupt the NATO meeting and birthday. That means anything that could threaten the security or the dignity of the occasion. A secure ‘red zone’ is planned to cover a large part of greater Strasbourg.

Looks to me like all the “plans of mice and men” are going to converge on Strasbourg in early April.

This could get good…