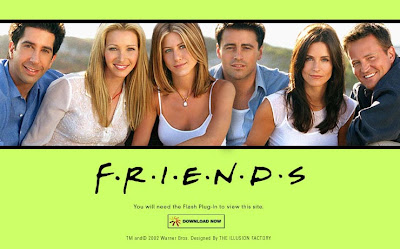 My wife came home the other day and started to discuss about a young man she met who was 17 years old. He was discussing with her about the virtues of America. She was relaying to me from what his basis for his love for America was built on. Believe it or not his conception of America comes from the reruns of the TV show “Friends”:

Friends is an American sitcom about a group of friends in the area of Manhattan, New York City. It was originally broadcast from 1994 to 2004 in a total of 236 episodes. It was created by David Crane and Marta Kauffman. The show has been broadcast in dozens of countries and still continues to attract good ratings for its episodes in syndication. The final episode of the show was watched by an estimated US audience of 51.1 million. (Link)

This obsession with “Friends” is nothing new to me. I teach English in Russia and if you knew how many times I had to interpret a “Friends” show, you would laugh!

It is kinda sad in a way that Russians build a false image of America around the show “Friends”.

This young man told Svet that “Even the dirt in America is brilliant and bright!” This young man based all he knew and believed about America from “Friends”. In his mind America was the most incredible place! It seemed to Svet that he worshiped America.

I have gone to multiples of pupils and had a lesson plan ready so that we could farther their English. But all they wanted to do was discuss an episode of “Friends” that they just watched last night. It is so important that they will pay $50 dollars an hour just to discuss a fake TV show.

Do they think the show is fake? I think that most do, but the underlining desire is so strong that they want the show to be true, so it is true!

I myself have only watched about three episodes of this show. I never found it worth wasting the time to watch. In my life, time was a precious commodity and every second was money in the bank.

Funny now that I have come to Russia, I know more about “Friends” than I ever did in America. My pupils have made sure of that…..