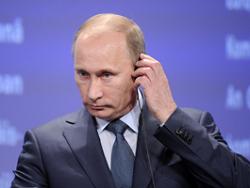 BRUSSELS, February 24 (Itar-Tass) — Russian Prime Minister Vladimir Putin has warned Moscow’s partners in the West against attempts at whipping up democratic processes in other countries in connection with the ongoing events in North Africa. He was speaking at a joint news conference with European Commission President Jose Manuel Barroso, devoted to the results of the full-scale meeting of the Russian government and the EU Commission.

“We are concerned, firstly, about the number of casualties in the events in North Africa. We are concerned about that despite the soothing claims a rise to power or growth in the influence of radical groups in northern Africa are unlikely.”

“And if that really happens, it cannot but affect other parts of the world, including, of course, the North Caucasus,” he said.

Having made this historical allusion, Putin recalled that the former leader of the Iranian revolution, Ayatollah Khomeini, before his return to Tehran and the overthrow of the Shah’s regime had lived in Paris, and the Western policy of “inoculation of democracy” in the Palestinian territories caused bloody conflicts and brought to power Hamas, very unpleasant for many in the West.

“The people are to be allowed to decide their own fate and their own future,” he said. ”We must give them an opportunity to build their own destiny in a natural way without any interference from outside.”

“Society must move toward democratic institutions, toward self-regulation, towards its own system, with reliance on the internal processes of development,” underlined the prime minister.