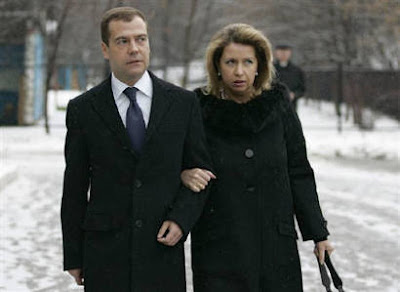 A Survey done on the national level was conducted to gather information about Medvedev.

Some basics of the survey said that:

1. 75% of Russians trust President Dmitry Medvedev, and more than 81% would not change their choice if asked to vote again.

2. Trust in Medvedev has grown from 56% in 2006 to 73% in 2009. With 16% said that they did not trust the current president, most of whom were supporters of the opposing Communist Party (KPRF) and the ultra-nationalist LDPR. 🙂

3. Amongst the 16% who did not trust Medvedev the reason was “That Medvedev had too high level of trust toward [Prime Minister Vladimir] Putin” (28%).

4. People said the main values that they see in the president is that he upholds the rebirth of Russia and its world authority (14%) and an increase in living standards (13%). Another 11% said that Medvedev’s main values are his social policies. Other positives noted were democratic values (6%), and anti-corruption measures (3%). Exactly half (50%) said they could not name the president’s main values.